There is one more interesting method for reactionless propulsion that is known as Shauberger's water vortex system. I think you can find its description in Internet and there are many speculations about this so called "diamagnetic levitation". The system by Victor Shauberger that I saw articles about, is the water vortex of helical topology and important parameters are logarithmical change of radius and change of the spiral steps (spiral period). In this system the gravitation force (weight of water) is the reason for self-acceleration of water in vortex.
It is useful to disclose my understanding of the method here to suppose similar technology.. 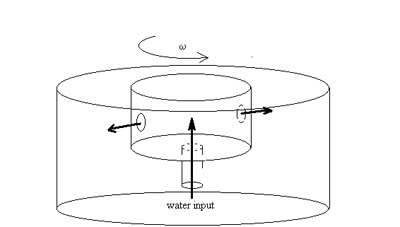 In this system there is the water inflow in central area and radial output. The rotation produce centrifugal force and water inside of the rotor is moving in radial direction.

So, this device is simple way to organize asymmetrical vortex: axial inflow and radial outflow of liquid. Reactive force in this system is radial only and by this way the trust can be created in axial direction.

Some additional details: the output flow can be directed in tangential way to accelerate the rotor.

Other Shauberger's project is two rotating disks where gradient of pressure between disks are created. There is water between disks and relative motion of water is created with different velocity for upper disk and for lower disk. The velocity is depend of disk surface topology: molecular rotation of water (micro vortex) are reason for different velocity. Physical sense of the effect is the pressure gradient that was described in my paper.


Back to "Projects"
Back to "Gravitation" Page