Gravation as Gradient of Pressure
Alexander V. Frolov
This project is described in paper  Gravitation Concept  . The idea is based on known property of the wing of special shape to create lofting, i.e. the force in direction that is perpendicular to  the wing.
This force at first was discovered by Russian Prof. Gukovsky and the shape of the wing is known as Gukovsky-Chaplugin's profile, Fig.1. It seems strange thing now but first airplanes were made with flat wings and their aerodynamics properties were using so called "attack angle". The vertical force for such sort airplanes is reactive, sure. But here we are considering the force as result of gradient only.

In this case the force is created as result of air pressure gradient, that is determined by difference in relative velocity between wing surfaces and air.

There is no reactive flow in such sort system and this idea can be used for spacecraft propulsion also. In closed system air or liquid circulation can be created by fan or pump, Fig.2

The wing here is connected with body of system. Many wings can be installed in radial superposition with some distance. Rotation velocity for liquid should be less than the velocity for air flow.

Other kind of the same system can be designed to use described above pressure gradient, Fig.3, that is produced when different relative velocities between liquid (gas or plasma or Ether) and two sides of the rotor is created. 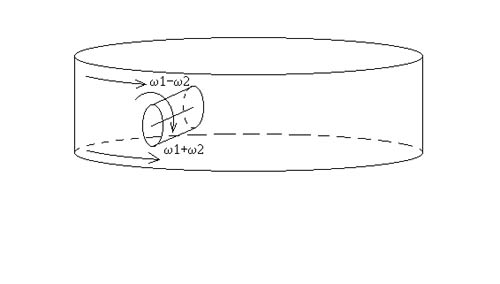 In such sort closed system the force that is acting to the wing is active and it should be demonstrate itself as reactionless propulsion force in axial direction. This closed system can be used as drive for any type of transport.

There are also some methods to create ionized gas (plasma) circulation and in this case the metal or dielectrical wing that is electrically charged is powerful source of lofting force.

In general case, that is described in my papers rotation of electrically charged wing also is the way for active force since by this way the gradient of Ether pressure can be created.


Back to Projects
Back to Gravity Page